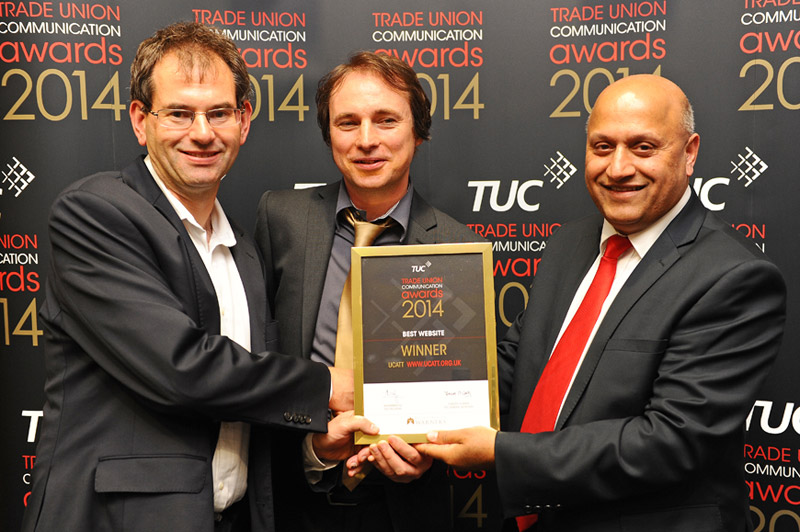 Every year the TUC holds an awards ceremony to recognise the achievements of affiliate unions in their communication efforts. The awards for 2014 have just been held, on Wednesday 9th July.

The award categories include traditional media, like best magazine and best illustration, but I always keep an eye on the two technology categories: best use of e-communications and best website.

UCATT nominated their new smartphone, widescreen and tablet friendly responsive website, which I'm proud to say I recently built with them, in the best website category. The judges chose it as the winner, commenting on the “very modern feel”, “clean layout” and “engaging home page”.

The Judges were very taken with the easily accessible tabs and navigation. It has a very modern feel. The clean layout throughout also won the praise of the judge. With campaigns on gangmasters, false self-employment and blacklisting the site has a lively feel. - TUC

The Equity website was highly commended for its “strong layout”, “easy to access pages” and campaign pages.

The RMT picked up a commendation for their new site, with its “simple, even punky design” with great interactive features.

This year, the winner of the best use of e-communications, which looks at innovative and effective ways of using online communications, was UNISON, for its teaching assistants celebration day.

The campaign proved really successful, with lots of positive feedback and testimonies about the great work teaching assistants do. NAPO was highly commended for its News Online website, impressively built by their in-house team using WordPress, the open source blogging platform, to keep costs to a minimum.

Also highly commended was USDAW for their e-newsletters: colourful and well-designed newsletters created to serve specific sectors of the union. In the traditional media categories, USADW was the winner of best journal/magazine, for Arena, their 'supermarket glossy' style, pocket-sized magazine.

The POA picked up top prize for best feature, with a hard-hitting special on prison violence.

The FBU got the best photo/illustration award for a stunning photograph of firefighters tackling a huge blaze.

The USDAW guide to maternity and parental rights picked up the best one-off publication prize, while Unite were awarded best campaign for the innovative Christmas food bank appeal, which they worked on collaboratively with charities and the media.

It’s great to see the high standards of media being produced by unions, and the TUC plays an important role in highlighting these efforts every year. I'm looking forward to seeing what 2015 brings.

Simon once again for all…

Simon once again for all your hard work on behalf of UCATT. You have made a massive difference to our website and our entire social media strategy.