Why you should own your website - the importance of developer independence

Early on in my career, I remember the frustration of inheriting a website that was locked into a development company that provided terrible service. It was the first website I had managed, built using a bespoke Content Management System (CMS) developed and managed by this company. Requests for bug fixes or changes were often ignored or done badly, and I spent a lot of my time chasing up the developers to get anything done. I also found that the charges were far higher than they should be. However, we were stuck with this developer as they built and owned the software. I had to start planning

Back in 2014, Prospect launched the Careersmart.org.uk website, providing information and guidance on careers and work issues from a union perspective. The site has recently undergone a major revision, with the new version launched at the end of April 2017. I’ve been leading on the redevelopment. The main focus of the redevelopment has been tapping into a new government big data source called ‘LMI (Labour Market Information) for All’. This online data portal connects and standardises existing data sources, such as the Annual Survey of Hours and Earnings (ASHE) and the Labour Force Survey (LFS) 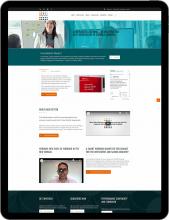 I’ve been working on a website for a new initiative, designed to encourage greater diversity and inclusion in the investment and savings industry. The site has recently gone live, and can be seen at http://diversityproject.com. The project started after a group of leaders in the investment industry got together in early 2016 and decided to take action to accelerate progress towards a more representative workforce in the sector. One of the driving forces behind it is the Helena Morrissey, the Chair of the Investment Association and former CEO of Newton Investment Management. She also set-up the

PHP 7 and the improvements to PHP 5

PHP is a website programming language. It’s the World Wide Web's most popular code, estimated to power over 80% of websites, including the likes of Facebook and Wikipedia. In December 2015, a major new version of PHP was released: PHP 7. PHP 7 is the first major upgrade to the language for more than decade. The main improvement is speed. PHP 7 is estimated to be around twice as quick as the previous version. It's also more memory efficient, using as little as half the amount of memory as before. There are also other benefits that programmers can use to enhance websites. However, there's one

Drupal 8 was released at the end of 2015. This is a major new version of Drupal, the second most popular website CMS (Content Management System). WordPress is the most popular CMS, and is a great solution for smaller websites and blogs. I use WordPress regularly to build these types of sites. However, for larger sites that need more complex solutions, I find that Drupal is usually the best option. While many CMS systems release major updates frequently, Drupal tends to be more stable. The last major release was Drupal 7 in January 2011. This new version (Drupal 8) was released almost 5 years