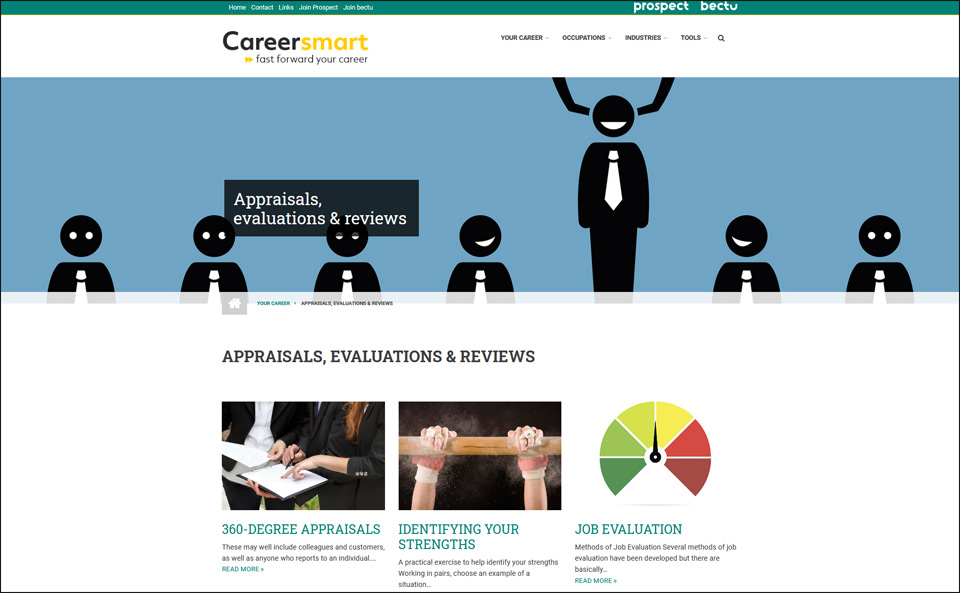 Back in 2014, Prospect launched the Careersmart.org.uk website, providing information and guidance on careers and work issues from a union perspective. The site has recently undergone a major revision, with the new version launched at the end of April 2017.

I’ve been leading on the redevelopment. The main focus of the redevelopment has been tapping into a new government big data source called ‘LMI (Labour Market Information) for All’. This online data portal connects and standardises existing data sources, such as the Annual Survey of Hours and Earnings (ASHE) and the Labour Force Survey (LFS).

To accommodate this new data, the site has been redesigned, with a new navigation structure and design. One of the major new features is a directory of all the official Occupations in the UK, as classified by the government's Standard Occupational Codes (SOC). Each occupation page shows data such as average annual salary, average working week, unemployment rate and future projected employment.

The final aspect of the data focuses on equality, looking at gender, age and regional differences in pay, hours and unemployment. There is also an industries directory, looking at occupational data for that industry, such as the highest and lowest average salaries, most employed occupations and highest average hours.

There are also detailed graphs breaking down average pay, hours and employment levels for all the common occupations in that industry. Aside from these directories, the site provides a lot of analysis using the latest data from the LMI for all ‘big data’ sources, such as looking at the best and worst paid jobs in the UK and the jobs with the longest hours.

The ‘big data’ sources are also used to look at trends in STEM (Science, Technology, Engineering and Manufacturing) and Digital, including working conditions and projected future growth. There is also a section dedicated to equality, including a revealing look at the gender pay gap by occupation, unemployment rate variations between men and women, and a breakdown by gender of the employment levels in all the occupations in the UK.

All this new data comes direct from the official ‘big data’ sources, and will be automatically updated as new data comes online. The site already contains a plethora of articles and podcasts on careers and workplace issues. Hopefully the addition of detailed labour market information will make it even more useful.

The site can be visited at careersmart.org.uk.