In a relatively short period of time, smartphones and tablets have completely changed the way we access the web. Long gone is the assumption that each user has a desktop PC. It’s hard to imagine a world now where people don’t spend time glued to the smaller screens of their phones or tablets. While responsive website design now allows the same site to adapt to the different devices, it’s always useful to know how users are accessing a website. Greater prioritisation can be given to the various design elements if we know that, for example, the site is being heavily used by smartphone users or

What is responsive design?

Every website I've built over the last few years have been developed using a technique called ‘Responsive Design’. I'm often asked what this is and why it’s needed, so I’d thought I’d explain this approach to website design. Before the rise of devices like smartphones and tablets, almost every visit to a website was made on a desktop or laptop computer. This made designing websites quite straightforward. You knew what kind of screen width most of your visitors would be using, and you could design a website around these fixed dimensions. Now people access websites through a plethora of gadgets

“Should we develop an app or a mobile friendly website?” I’m increasingly coming across this question. It’s important to understand the pros and cons of each approach. Against a background of rapid growth in the use of smartphones and tablets, many organisations are unsure about the best way to target users on these devices. Apps are one obvious way to engage with this audience. However, HTML5, the latest version of the mark-up language that powers websites, has been pushing the growth in responsive website design, making more websites accessible to smartphone and tablets. Responsive design 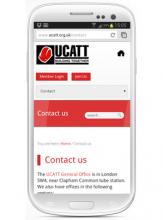 Which union websites work well on smartphones, tablets and widescreens?

I recently developed a new website for UCATT, the union for construction workers. Most of their members do not work at a desktop PC - so it was vital for the website to display well on smartphones. This is increasingly required for all websites, not just union sites. The biggest single change to website design over the last couple of years is driven by the increasing variety of screen sizes used to access them. Five years ago it was simple. A website would be designed to perform well at a fixed size that fitted well with the average desktop screen of the day. Now, people are using smartphones

Changes in technology and their impact on the world have been relentless over the last few years, and 2012 doesn’t look to be any different. Below is a list of predictions and trends for 2012. Social networking continues to dominate The number of global Facebook users reached 700 million in 2011, and is predicted to reach 1 billion in 2012. While growing fast in countries like Brazil, Facebook already dominates social networking in the West. Twitter’s rise, especially in the media, looks set to continue. Social networking played a key role in the civil unrest of 2011, most noticeably in the

Can 'The Daily' save newspapers?

Traditional journalism has had a tough time of it recently. With so much content now available for free online, newspaper sales have been falling steadily for years with free papers representing the only growth area. The launch of ‘The Daily’ by Rupert Murdoch’s News Corporation marks an interesting experiment for a news industry facing an uncertain future. ‘The Daily’ is an online newspaper with a new approach. It is a gamble on the future of devices we will use as it is not available on desktops or standard laptops. This new newspaper is only available on the iPad but there are plans to