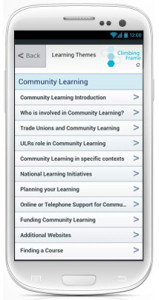 A new addition to the world of trade union Apps has just been released. TUC unionlearn’s popular Climbing Frame website, an online service primarily aimed at Union Learning Reps, has been launched as an App.

The App is another way of accessing the same information as on the website, allowing Union Learning Reps and other learner managers to access learning content and manage the progress of learners. The Climbing Frame is a long established tool, created by the TUC’s learning and skills organisation unionlearn. It’s most recent form - that of a website-based service - has proved popular with thousands of users.

It contains a number of ‘learning themes’, such as Information and Communications Technology (ICT) and ‘English & Maths’, as well as a few employer- and union-specific topics.

One of the most useful aspects of the Climbing Frame is the ability of Union Learning Reps to keep track of the progress their learners are making. However, accessing this service proved difficult for users who work without direct access to desktop or laptop computers.

There was a demand to be able to access the learner management facility with smartphones and tablets, via wi-fi and mobile internet access. I was heavily involved in the project. One of the key things we identified early on was a need to prioritise what people wanted most from the App, as a limited budget meant we couldn’t recreate the entire Climbing Frame.

We surveyed the existing users, and while the learning themes were seen as essential, the ability to manage learners on the go was considered key. This was especially the case for Union Learning Reps working in areas like retail, where a tablet or smartphone are often the only way to access the internet when working with learners.

People can register via the App as well as the website, meaning people can now use the Climbing Frame service entirely through the App without any need to ever access a desktop.

The App is available for Android smartphones and tablets as well as for the iPhone and iPad. To find the App, simply search for ‘Climbing Frame’ in the relevant App store or use the links below:

Thanks for this Simon, your…

Thanks for this Simon, your contribution to the Climbing Frame App project was invaluable. Your expertise and knowledge of digital technology was a tremendous asset in helping us at unionlearn to develop and produce a high quality product. The project management skills you provided ensured that the app was delivered on time and within budget, and you created a very clear and simple user journey with your design of the app layout and navigation.

The app has been designed to equip reps with the information and tools they need to effectively support learner progression. The app is proving to be very popular with union learning reps and feedback about the design, content and ease of use has been very positive.

Thanks Simon, your knowledge…

Thanks Simon, your knowledge and guidance was crucial in helping develop the Climbing Frame App design and functionality. Early indications show that union learning reps are finding the tool really useful when accessing support information and registering learners in their workplaces. On a personal note, I think the design and look of the App is great. We had a surge of new users following the launch and hopefully this will continue. Thank you.