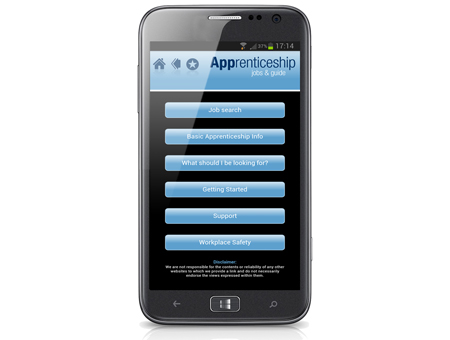 I’ve recently been working with Prospect and Unionlearn to develop an app aimed at people doing or considering doing an apprenticeship. It's just been officially launched to coincide with National Apprenticeship Week 2013 (March 11th to 15th).

It’s available on Android smartphones and tablets, and the iPhone/iPad. The objective was to create an app that apprentices and would-be-apprentices would find useful and want to download, but also to give advice about their rights at work (such as health and safety, minimum rates of pay and what should be covered in an apprenticeship contract).

Our research showed that the biggest demand was for an apprenticeship job search facility, and so we made this a key part of the app, to help maximise demand, with the employment rights advice then built around the jobs offering.

There are currently two main sources of apprenticeship jobs in the UK, the National Apprenticeship Service and Not Going To Uni. Previously, job seekers had to search both websites separately, but our app pulls together both sources so that jobs from both can be found in one place. Like with many union technical projects, the budget for the development was limited, so we had to find the most cost effective approach.

Rather than building the app in the ‘native’ language for both Android and Apple devices, we used HTML5, the latest version of the code that runs websites, built into an app format.

This avoided having to build the App in two separate languages, and significantly reduced the costs. It also makes the content easier to update, and avoids users having to manually ‘update’ their app regularly. I spent time app store optimising (search engine optimising for app stores) the app, so that it ranks high in related searches in the app stores, which has proved to be very effective.

Although the app has only been available for a few weeks, with very little publicity yet, it has already proved popular. The Apprenticeship app is available for free. It can be downloaded for Android here, or can be found by searching for ‘apprenticeship’ in the Google Play store.

[Update: The app has now been discontinued after 6 years of use. It was downloaded well over 40,000  times in total.]